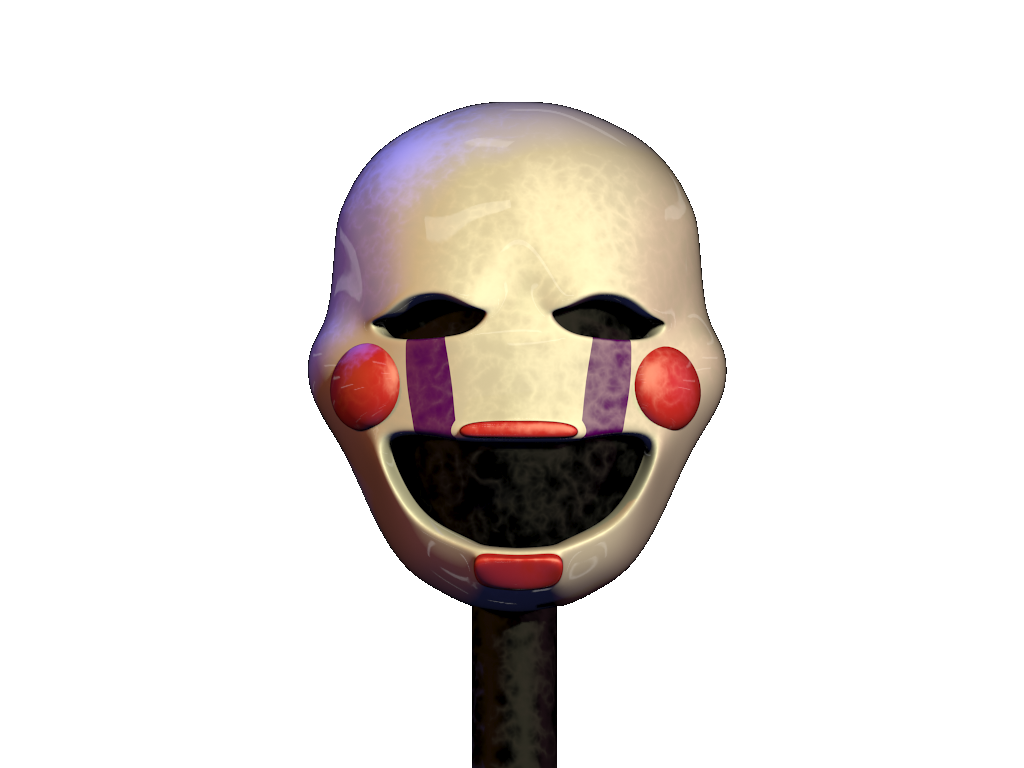 The Puppet (or the Marionette) is the main antagonist of Five Nights at Freddy's 2 (and possibly related to the driving force behind the original game, as he is speculated to have brought Freddy Fazbear and the others to life). He is located in the Prize Corner, and will only start moving if the music box's music stops.He is known as the first dead child killed when this all started before they opened Freddy's Fazbear's Pizza.

At what is presumed to be the first restaurant, the killer claimed his first victim in the shape of a child who was left inside for unknown reasons and left his body for others to discover,

the child rose from the grave through blind hatred and began to search for the killer and at some point, he came across one of the many Freddy Fazbear's Pizzeria's and possessed a puppet which was which was created for the purpose of giving prizes to children in the Prize Corner, eventually the killer came back to his hunting grounds and claimed 5 more victims, the Puppet, knowing what it felt like to be killed and not wanting to be alone,

brought the victims back to life by putting the bodies and souls inside the bodies of Freddy Fazbear, Bonnie, Chica, Foxy and the already out of order Golden Freddy (who somehow developed the power to become a spirit). but due to smelling due to the decaying bodies stuffed inside, the originals were placed inside the storage room and replaced by the Toy animatronics, however these new robots would not stay untainted for long, after the first guard (before Jeremy Fitzgerald) started and finished his first and only night watch week,

the Puppet presumed that the Killer had returned and tampered with the Toy animatronics by messing with their security systems and made it so they would be aggressive to all forms of staff and customers but not to kids, eventually Jeremy Fitzgerald started his first week, with Phone Guy guiding him, telling him of the tensions and mysteries occurring during the daytime while expressing his uneasiness with the Puppet (perhaps knowing it was possessed)

during the day time before the sixth night the Killer presumably returned and used the Golden Freddy or Spring-Bonnie suit and claimed 6 victims, the Puppet acted quickly and stuffed the victims inside the Toy robots (including Balloon Boy) but due to already being tampered with by the Puppet the Toy animatronics were hostile to everything and messed up,

the Phone Guy informed Jeremy of this and informed him that he and the other staff were closing the pizzeria to fix the robots, after Jeremy miraculously survived the sixth night Fritz Smith took up the mantle of the night guard and fended off the crazed Toy and Old animatronics for six hours of the 7th night before being fired for bad odour, the Toy animatronics were pulled from show acting and scrapped, with the Old animatronics retaking their spotlight, it is unknown what became of the Puppet, as the newspaper article said that the Toys were scrapped but the Puppet was NOT and animatronic so as of now its fate is ambiguous.

The Phone Guy mentions that the player needs to keep the Music Box wound, as the animatronics have a feature where having no noise will cause them to try to find sources of noise or potential customers; the source being, in this case, The Office. Keeping the Music Box wound is vital; if it is left unwound for too long, the Marionette will exit the Prize Corner and the player will be attacked, resulting in a Game Over.

The Music Box can be wound remotely by going to CAM 11. As it unwinds, a warning sign will appear next to the CAM 11 box on the camera map, as well as on the bottom right of the screen when not using the Monitor. The warning sign starts out orange, signalling that the music is about to end. If it is blinking red, the music is about to end, and the Marionette is seconds away from beginning its attack. Once the red exclamation mark disappears, it is too late, and the Marionette will begin to move towards The Office.

Regardless of what happens after it begins its attack, even if the Music Box is wound up after it has left the Prize Corner, the Marionette will still make its way towards The Office, attacking in a manner very similar to Foxy. There is no way to stop it once it has begun its approach and will kill the player even if they are wearing the Freddy Fazbear Head. The player will know it has left if they hear the tune "Pop! Goes the Weasel" begin to play. Another hint the Marionette left is the disappearance of the danger sign. The player will be unable to find The Marionette on any camera once it has left the Prize Corner to attack, except in rare cases of briefly seeing it (for one frame) on the Main Hall and Party Room 2 cameras.

There is a minigame that first says "give gifts". As the Marionette, you do as he did at the Prize Corner and give them gifts. Then, it changes to "give life". Then you place the heads of Freddy, Foxy, Chica and Bonnie on the slumped-over figures of the children, and just as you finish, you get a Golden Freddy jumpscare (this may mean Golden Freddy was the suit he or the killer hid in). This leads many to believe he was the killer (or maybe the killers partner of some sort, although very unlikely). It's also speculated he may have found the children's bodies and put them in the suits in a non-heinous way, seeing them as an empty endoskeleton without a suit or even to simply "give life" to them so they could still live on as animatronics. It's also speculated that he was the crying child from the mini game "Give Cake To The Children".

While not appearing in the game itself, the Puppet is the one bringing the animatronics to life in the first place, just not making a physical appearance.

The Puppet will be encountered twice. In the Mangle's Quest minigame, upon glitching through the wall, a gigantic version of the Puppet can be found, kneeling down and crying. The Puppet is the playable animatronic in the Happiest Day. If all of the children have been found, the Puppet moves past a party, and the souls of Freddy, Bonnie, Chica, and Foxy, and gives a giant cake to the soul within Golden Freddy, The Puppet, along with the others, ascends to the afterlife, at peace at last, with the Killer defeated, and Golden Freddy happy at last. Also, a hallucination of it called Phantom Puppet appears in the game as well.

The Puppet enjoys listening to its music box. However, once the music box unwinds, he becomes angry, and is intelligent enough to know precisely where the night-guard is. It will charge straight for the office, and must be extremely strong despite its wiry frame, in order to overpower an adult or possibly teen human. It is also smart enough to not be fooled by the Freddy head trick.

Retrieved from "https://antagonist.fandom.com/wiki/The_Puppet?oldid=56508"
Community content is available under CC-BY-SA unless otherwise noted.