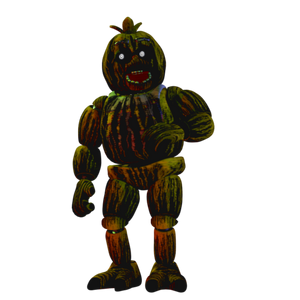 Phantom Chica is essentially the same model as Chica from the first game, but she lacks eyes and instead has pin-pricked, white irises. She also looks to be charred or burnt, possibly foreshadowing the torching of the attraction. People tend to think that the torso of this Chica looks like a charred watermelon.

Phantom Chica randomly appears in CAM 07 in the arcade machine's monitor in a brightly contrasted, black-and-white, close-up image. Much like Phantom BB, after closing the security cam, she will appear in the room to the left of the player, jumpscaring them.

Phantom Chica lacks a movement pattern, but rather randomly replaces the arcade machine's monitor with a distorted image of her face, the frequency of this occurring increasing as the week progresses. If the player does not change Monitor views when this occurs, Phantom Chica will appear in the left side of the Office and proceed to lunge at the player if viewed, disappearing and disabling the ventilation system.

Retrieved from "https://antagonist.fandom.com/wiki/Phantom_Chica?oldid=56493"
Community content is available under CC-BY-SA unless otherwise noted.