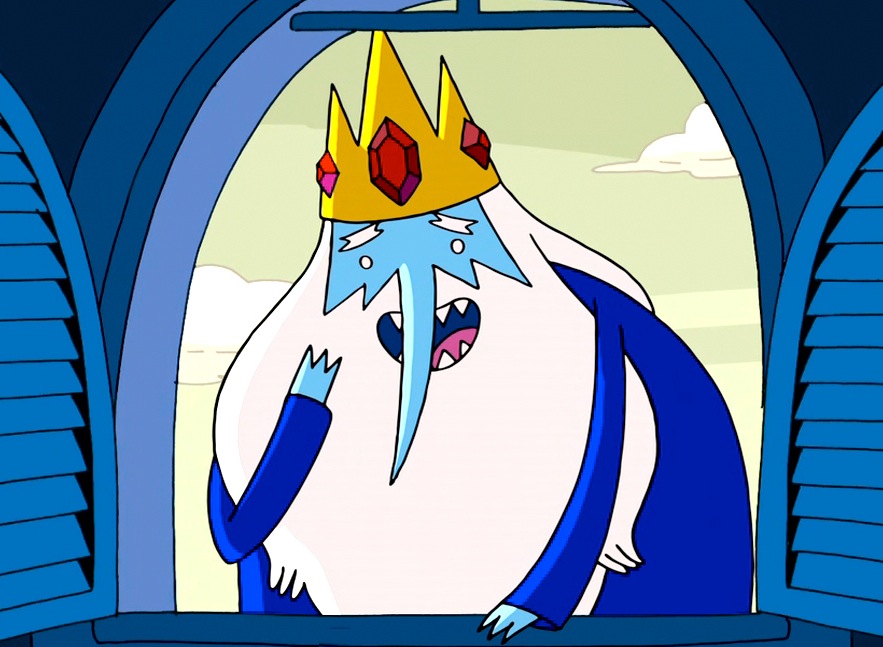 The Ice King, formerly known as Simon Petrikov, was the main villain of the first three seasons of the Cartoon Network series Adventure Time, and later a reccuring protagonist (see on Heroes wiki) during the rest of the seasons. He is voiced by Tom Kenny (who also voiced Magic Man in the show)

The Ice King was once a scientist named Simon Petrikov who one day purchased a crown with three red gems in it. At first it seemed normal, but when he put it on for a joke to his fiancée Betty, he started seeing visions and heard voices that, with time, caused him to completely lose his mind and chase off his fiancée away, realizing what the crown is doing to him, he had no choice but to leave the young Marceline (who he met after the great mushroom war) all alone. To this day he is still a psychotic man who wishes to capture and marry a princess (which was motivaded by his memory of him calling his fiancée a princess). However most of his plans backfire (Ricardio, Scorcher)

He is a sad, lonely man who in truth only wishes to have friends and to have someone to love, not realizing that he actually had those due to the crown erasing his memories. However, as the show progresses he is shown to be much more friendly and nice with both, the heroes Finn and Jake, and to Marceline, especially in the new season 7 miniseries Stakes, where he helps clear Marceline's head about the Vampire King. He is show to be fond of his “penguin” Gunter/Orgalorg

Retrieved from "https://antagonist.fandom.com/wiki/Ice_King?oldid=65292"
Community content is available under CC-BY-SA unless otherwise noted.