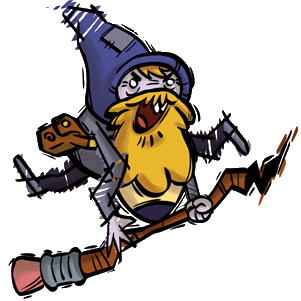 Doodle Wizard is the main antagonist of the game Adventure Time: Game Wizard. He has the magical ability to turn things he draws real. He is voiced by Grammy award winner Weird Al Yankovich.

After Finn and Jake obtain a magic pencil that has the same powers as his, he decides to destroy them (or the character the player chooses) and will create the boss fights and enemies in the game, Earl of Lemongrab, Magic Man, and a giant version of Gunter. In the final boss fight he himself fights them in his Doodle Domain. Where he creates projectiles and flies around to harm them. After he is defeated, he implodes and is destroyed. Leaving Finn and Jake to freely draw what they want.

He is extremely arrogant and self-centered, as he is willing to kill anyone who is as powerful as he is. Other than that, he is shown to be quite devious and a bit psychotic. His sole wish is apparently to be the most powerful wizard of all time, and to destroy anyone who tresspases in his world.

Retrieved from "https://antagonist.fandom.com/wiki/Doodle_Wizard?oldid=51448"
Community content is available under CC-BY-SA unless otherwise noted.