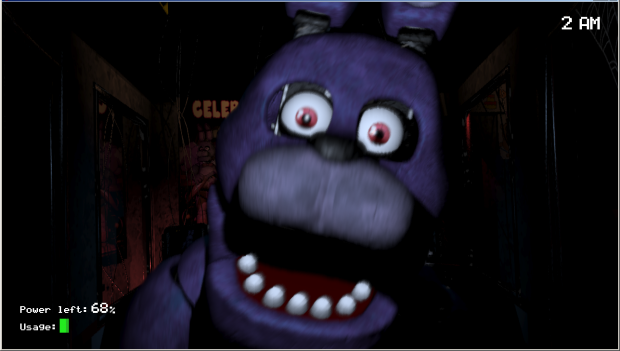 Bonnie the Bunny, also known as Bonnie and The Bunny, is one of the secondary antagonists of Five Nights at Freddy's. Bonnie is a purple animatronic bunny in a red bowtie. Like his fellow animatronics Freddy and Chica (and formerly Foxy), Bonnie is a friendly child entertainer during the day housed at Freddy Fazbear's Pizza, but kills any human he sees during the night.

Bonnie is often able to travel quickly. If he waits outside the door, it isn't for very long, although if he is far from the office, he can travel there very quickly. Shutting the door on him wears him out quickly into leaving, as opposed to the persistent Chica. He is also the first to leave the stage. One of his dirtiest tactics is to hide in the storage closet, and bound to the office at an incredible speed, and catch Mike off guard. He is very unpredictable and possibly impatient as he twitches constantly on Night 3, indicating he might be getting frustrated. Many believe he is possessed by the soul of a dead child explaining his wheezing sounds, and unpredictable behavior.

Bonnie is the most active enemy in the game and is usually the first to move, slowly making his way to the player's office (teleporting instantly on later nights) and will always appear in the left doorway.

The player can lock him out. Otherwise, Bonnie will simply stand there until the player checks the camera or the power runs out. If they check the camera, Bonnie will be triggered into attacking. However, with enough power left you can keep checking the monitor until 6 AM and Bonnie will be stalled. If the power runs out, Freddy will attack instead. An easy way to check if Bonnie is behind the closed door, is to turn the light on and faintly expose his shadow from the window.

Bonnie returns in the second game as one of the antagonistic animatronics. He has two buttons added to his chest and is also the most damaged of all the older animatronics. His face has been gutted while his lower jaw remains, featuring more teeth than he possesses in the previous game as well as glowing red irises. His left arm is missing entirely, with a mass of wires in its place. His suit has become tattered, particularly around the legs, and a few loose wires poke out of his body. The covering on his right hand and his entire left arm has come off, revealing his endoskeleton and wires. He also seems to have a bigger stomach than before, as it looks more rounded and bigger than his upper body. His chin also doesn't squash his bow tie now. It is explained that the management tried to have Bonnie and the old animatronics retrofit but this was scrapped in favor for the newer, toy models. His being Toy Bonnie.

Bonnie starts with the rest of the older animatronics in the Parts/Service Room. He seems to travel to the Main Hall and then heads to the room just outside the Security Office, staring at the player just from the outside. Afterwards, he then travels to the Left Air Vent to get into the Office and attack, though can be warded off with the Freddy Fazbear Head.

A dream version of Bonnie called Nightmare Bonnie appears haunting the child protagonist. Bonnie himself appears in the mini-game cut scenes preforming in the open diner.

Retrieved from "https://antagonist.fandom.com/wiki/Bonnie?oldid=47415"
Community content is available under CC-BY-SA unless otherwise noted.